Thanks to the Web, and in later years, YouTube, it seems that I’ve known Brooklyn based Jazz Guitarist Rick Stone for over 15 years. Given that time frame, it’s surprising that I’ve never met him in person, nor have I ever heard an album from this talented player…until now.  With Fractals, Stone’s latest CD, I’m pleased to say that it has been well worth the wait!

As a performer and much sought after educator, Rick Stone has enjoyed a healthy balance of both while continually developing his craft as a dedicated improviser and interpreter of the Jazz standard. This is immediately evident from the opening vamp (think Ellington’s “Caravan”) leading into “Stella By Starlight”, as he displays an exotic sense of drama that sets up the memorable melody beautifully. Stone’s solo is a nice blend of up-tempo single note lines, coupled with occasional chord shots and dissonant two note fragments. His note choices reflect a more modern harmonic approach, which he conveys nicely, along with a healthy respect and admiration for the tradition and those who came before him.

The subtle and not so subtle reharmonization of “Darn That Dream”, and to a lesser extent, “Smoke Gets In Your Eyes” and “Ballad For Very Sad And Very Tired Lotus Eaters”, greatly reflect Stone’s reverence towards the Jazz lineage, while bringing something new to the table. In essence, Stone is adding to a body of work that encapsulates the language of Jazz while allowing future players to reflect more on a tune’s given harmonic structure as fluid rather than static. Not an easy task, but one that Stone succeeds at magnificently.

“Fractals”, the aptly titled original composition, is a good case in point. Based on the changes to “All The Things You Are”, Stone’s solo intro is an intricate, complex and fragmented intervallic deconstruction of the changes that is as exciting as it is fresh, while still remaining quite familiar. The up-tempo melody playfully skirts around the original melody sounding quite at home within the changes as does Stone’s solo, which is ever flowing and tasteful.

In fact, flowing and tasteful seems to be Stone’s modus-operandi as he plays with proficient cleverness and deftness, while not allowing his technique to take over, which would be quite easy to do given his ability as a player. It is this attention to the original intent of the tunes that I, and I am sure, others, appreciate. Whether it’s the breezy “Key Lime Pie”, the boppish “Speed Bump”, the Monk-ish “Nacho Mama’s Blues”, the soft “Places Left Behind”, the hip Stompin’At The Savoy-esque of “The Phrygerator” or the medium Basie style swing of “Scoby”, Stone manages to play great without exhausting his chops for the sheer sake of it. An admirable quality to have as a musician!

Of course, Rick Stone is not the only one with admirable qualities, as bassist Marco Panascia and drummer Tom Pollard exhibit their own tasteful abilities as both accompanists and soloists. Panascia and Pollard are top shelf players indeed and a perfect compliment to Stone’s explorations. Check out the Stone composition ‘Speed Bump” for a nice demonstration of how the group plays together. Mind you, every tune features their selfless collaboration in pursuit of synchronicity, making for a most pleasurable CD to listen to.

Also pleasurable to listen to is Stone’s D’Angelico laminate arch top, which has a gorgeous warm, round tone that doesn’t get lost in the mix. Recording engineer Michael Brorby did a wonderful job at getting all the players balanced and mixed properly. The result is a warm sounding record of a great session. Kudos to all!

Needless to say, Fractals would make a wonderful addition to any Jazz Guitar fans music collection. And if you don’t know of Rick Stone yet, drop by his website, or more importantly, check him out in a live situation, you won’t be disappointed! 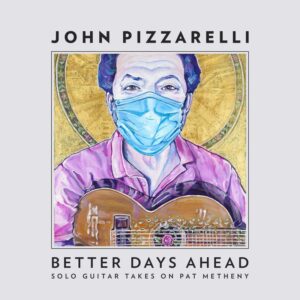 © All material on Jazz Guitar Life is protected under copyright law and may not be used without the express permission of its owner.